Hello! Today I'm going to try out the 100 useless questions. I know its lame, but its kinda fun. Let's just treat this as a mini quiz for me, so you guys can find out more about me.
OKAY LET'S START!
Are you an innie or an outie?
Ans: Outie
Have you ever written a song?
Ans: No

Can you make change for a dollar right now?
Ans: No

Have you ever been in the opposite sex's public toilet?
Ans: Seriously No!

Have you ever written a poem?
Ans: Primary 5 (Chinese) NOT BAD ARH!

Do you like catsup on or beside your fries?
Ans: Huh? Fries nicer

Have you ever been a boy/girl scout?
Ans: Nope, But i was in NPCC.

Have you ever written a book?
Ans: YESSS when I was a kid!

Have you ever broken a mirror?
Ans: I don't think so

Are you superstitious?
Ans: Sometimes

What is your biggest pet peeve?
Ans: Huh? What you mean?

Do you slurp your drink after it's gone?
Ans: YES

Have you ever blown bubbles in your milk?
Ans: Duhhhhh!

Would you rather eat a Big Mac or a Whopper?
Ans: Big Mac

Have you ever gone skinny-dipping?
Ans: Nope

Would you ever parachute out of a plane?
Ans: Never

What's the most daring thing you've done?
Ans: Manage to survive looking at blood for a very long time

When you are at the grocery store, do you ask for paper or plastic?
Ans: Paper

True or False: You would rather eat steak than pizza.
Ans: True

Did you have a baby blanket?
Ans: YES

Have you ever tried to cut your own hair?
Ans: YES

How did that turn out?
Ans: It was okay

Have you ever sleepwalked?
Ans: Yes!!

Have you ever had a birthday party at McDonalds?
Ans: Nope, KFC once.

Can you flip your eye-lids up?
Ans: EWWWWW NOPEE!

Are you double jointed?
Ans: Nope
If you could be any age, what age would you be?
Ans: 22

Have you ever gotten gum stuck in your hair?
Ans: Nope

What is your dream car?
Ans: Any Honda Car!!

What is your favorite cartoon of all time?
Ans: Pokemon

Have you ever eaten a dog biscuit?
Ans: Nope, I heard its healthy. LOL

If so, would you eat another one?
Ans: NO

If you were in a car sinking in a lake, what would you do first?
Ans: Get out of the damn car and swim myself out.

Have you ever ridden in an ambulance?
Ans: Nope

Can you pick something up with your toes?
Ans: YES!!

How many remote controls do you have in your house?
Ans: More than 4

Have you ever fallen asleep in school?
Ans: duhhhhh

How many times have you flown in an airplane in the last year?
Ans: Once

How many foreign countries have you visited?
Ans: Hmmmm countless. LOL

If you were out of shape, would you compete in a triathlon if you were somehow guaranteed to win a big, gaudy medal?
Ans: YES

Would you rather be rich and unhappy, or poor and happy?
Ans: Rich & Unhappy ( I can make myself Happy )

If you fell into quicksand, would you try to swim or try to float?
Ans: FLOAT. I just learnt that yesterday in physics.

Do you ask for directions when you are lost?
Ans: yes

Have you ever held a Mexican jumping bean?
Ans: WHATS THAT?

Are you more like Cinderella or Alice in Wonderland?
Ans: Cinderella

Do you prefer light or dark bread?
Ans: Light

Do you prefer scrambled or fried eggs?
Ans: Scrambled

Have you ever been in a car that ran out of gas?
Ans: YESSSSSS

Do you talk in your sleep?
Ans: Sometimes

Would you rather shovel snow or mow the lawn?
Ans: Shovel Snow

Have you ever played in the rain?
Ans: YES
Did you make mud pies?
Ans: NOPE, BUT LOVE TOO

Have you ever broken a bone?
Ans: My left foot

Would you climb a very high tree to save a kitten?
Ans: No, I know I'm not kind heart, but I probably would. LOL

Can you tell the difference between a crocodile and an alligator?
Ans: Seriously, NO 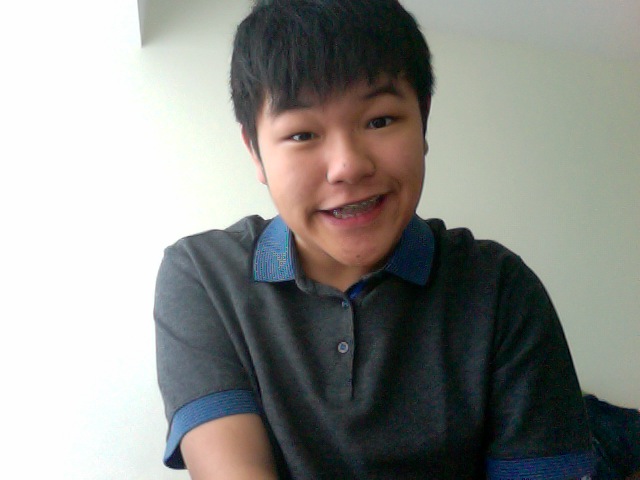 Random photo of me, suddenly pops up! (:

Do you drink pepsi or coke?
Ans: COKE

If you were a car, would you be an SUV or a sports car?
Ans: SUV?

Have you ever accidentally taken something from a hotel?
Ans: YES

Have you ever slipped in the bathtub?
Ans: NOPE

Do you use regular or deodorant soap?
Ans: Regular

Have you ever locked yourself out of the house?
Ans: Yes

Would you rather make your living as a singing cowboy or as one of the Simpsons voices?
Ans: Singing Cowboy

If you could invite any movie star to your home for dinner, who would it be?
Ans: Priscilla Doh or hahahah some

Do you need corrective lenses?
Ans: Contact lenses, yes.
Would you hang out with / date someone your best friend didn't like?
Ans: NO

Would you hang out with someone your best friend liked, but you didn't like?
Ans: Yeap.
Have you ever returned a gift?
Ans: YES
Would you give someone else a gift that had been given to you?
Ans: YEAP

If you could attend an Olympic Event, what would it be?
Ans: No, I won't

If you could participate in an Olympic Event, what would it be?
Ans: Badminton

How many pairs of shoes do you own?
Ans: Countless

If your grandmother gave you a gift that you already have, would you tell her?
Ans: Okay, Give me more!! :)

Do you sing in the car?
Ans: duhhhh

What is your favorite breed of dog?
Ans: All types

Would you donate money to feed starving animals in the winter?
Ans: YESSS

What is your favorite fruit?
Ans: Watermelon

What is your least favorite fruit?
Ans: Pineapple

What kind of fruit have you never had?
Ans: Hmmmmmm, Guava

If you won a $5,000 shopping spree to any store, which store would you pick?
Ans: Apple Store

What brand sports apparel do you wear the most?
Ans: Adidas

Among your friends, who could you arm wrestle and beat?
Ans: Eugene Ng

If you had to choose, what branch of the military would you be in?
Ans: SPF.

What do you think is your best feature?
Ans: Idk!

If you were to win a Grammy, what kind of music would it be for?
Ans: Best New Artiste

If you were to win an Osacr, what kind of movie would it be for?
Ans: Cartoon

What is your favorite season?
Ans: Winter
How many members do you have in your immediate family?
Ans: 4

Which of the five senses is most important to you?
Ans: My EYES

Would you be a more successful painter or singer?
Ans: Singer
How many years will/did you end up going to college?
Ans: IDK!

Have you ever had surgery?
Ans: Nope, I want a nose job.

How many collectibles do you have?
Ans: Nothing

What one question would you add to this survey?
Ans: I'm too lazy to think of anything.
OMGGG I HAVE COMPLETED 100 ABSOLUTELY LAME QUESTIONS.
I hope you enjoy them, btw, If you wanna do the quiz too the link is below.
sources: http://www.cfcl.com/vlb/Memes/Questionaires/100questions.html