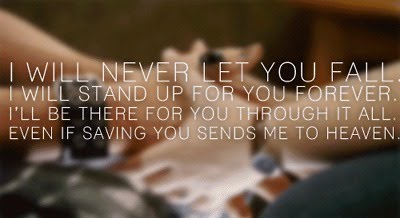 This post will be ON friends. Since I'm graduating this year, I want talk about this topic because it's worth typing for. I'm taking my time off from studying now because nothing is going in my head!! It will be about friends in life~ Okay let's start!
People always think the most painful thing is losing your friend but the truth is the most painful thing is losing yourself.
Totally agree on that because I've suffered the same thing years back since I was small. I have faced many back-stabers in life. Every since I tell someone a secret, by the next few days, EVERYONE will know. Then obviously, I will be damn pissed with that person and do not want to talk to him/her. Always at the end of the day, I will just forgive the person and patch back the friendship with him/her and the same situation will restart again from the start.
It's amazing how much feeling you can build up for someone in such a short amount of time.
This always happen in camps or either your first day of school etc., where you meet a stranger and you think that he/she is nice and want be friends with them. In no time, you'll have someone to talk to and thats the root of all friendships.
You can't be best friends without insulting each other constantly.
This is another common one. When I was 10, I had a best friend. At first he didn't really like me because we keep on comparing on who's better. He was always insulting me with all those mean stuff. I have no idea one day, he suddenly turned good and started to treat me very nice. In no time, we started having the same interest and became best friends in less than 2 months. WOW. Sadly when I was p6 I went to another class and I left him because I needed a new friend, *I DAMN bastard right haha* He didn't wanted to talk to me after that. This brought me to another lesson that NEVER LEAVE YOUR FRIENDS ALONE.
I will always care about my friends even when they think i don't give a shit.
Even if my friends don't like me anymore, I will still try my best to make it up for him or her because it's very hard to find another friend with that similar personality. In the end, he/she will be touched and might want to forgive you!
Now in my current life, I don't have a best friend, because I'm scared to become hurt again. It's always happen to me that the person will betray me by going to the other person. Someone once told me that BEST FRIENDS only can be 1. Not 2, not 3. I was so pissed with what she said and totally ignored her words. From then since, I've never believed in anyone so close to me because the same triangle drama will recur again and again. BUT it's good to have GOOD FRIENDS.