My experience at Preview Screening of Channel 8’s The Journey: A Voyage 信约：唐山到南洋

Get ready and prepare to catch the year-end blockbuster drama "The Journey: A Voyage" by Channel 8 because because this drama is going to blow your mind! I knew about this drama a few months back and finally the wait is finally over, I was actually anticipating for this drama to air because I know it's going to be very interesting and there are many of my favourite actor and actresses there will be acting in this show like Jeanette Aw, Joanne Peh, Elvin Ng, Terrence Chao, Chris Tong and many more!

I was so fortunate and lucky to be invited by Channel 8 for a private preview screening of this drama held at Bugis+ (formally Illuma) together with other bloggers to cover for this event, it was definitely a great honor and major opportunity to be able to participate this event. I brought along Qin Pin with me for this event!

This drama also marks Channel 8 50th anniversary year-end blockbuster as this will be the latest latest grand production of the new decade which will mark a new peak to local drama! 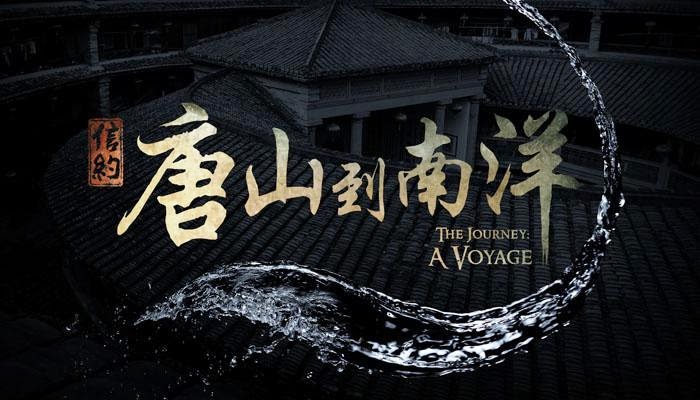 The Journey: A Voyage  信约：唐山到南洋

The Journey: A Voyage is a year end blockbuster drama by Channel 8 featuring our first-generation of chinese immigrants who came to Singapore to expand their fortune and careers. This journey of this drama includes how a character struggles with difficulties, building their own homeland and able to enjoy the fruits of their success.

It tells the stories of three young men as they faced the tumultuous 1920s and eventually survived the odds to call Singapore home.

The Journey: A Voyage is part of MediaCorp’s TV50 celebrations and part of a trilogy which will culminate in Singapore’s nation building celebrations in 2015.

When we arrived the venue, we were all served refreshments / light dinner while waiting for the cast of this show to arrive! 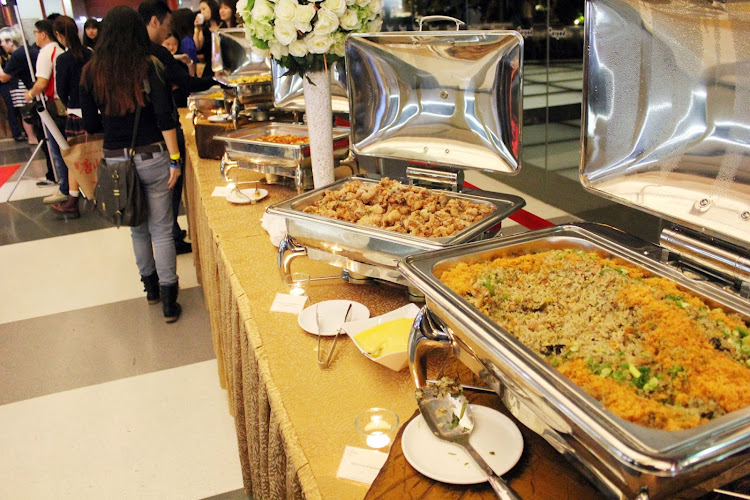 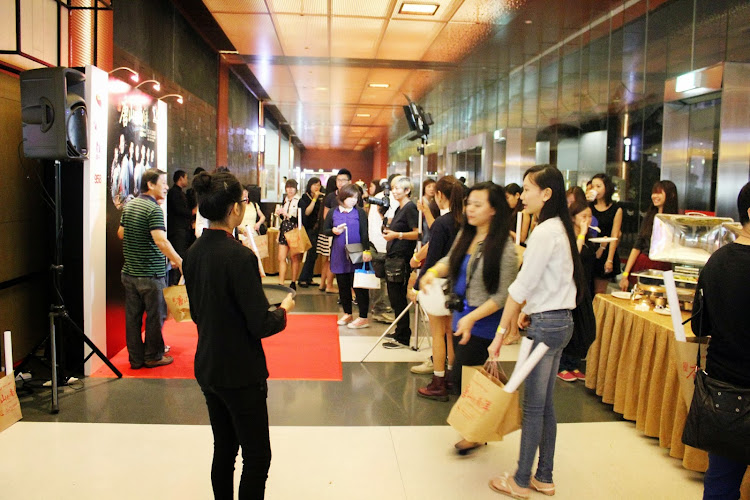 Just look at the anticipating crowd all prepared for the cast to arrive. 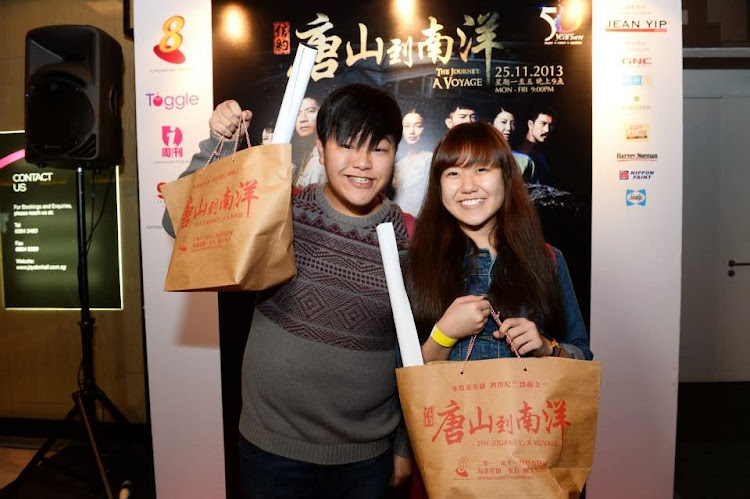 Thank you Channel 8 and sponsors for the goodies which included a poster of this drama! Seems like Qin Pin and I are enjoying the *star* moment when our photos were taken! 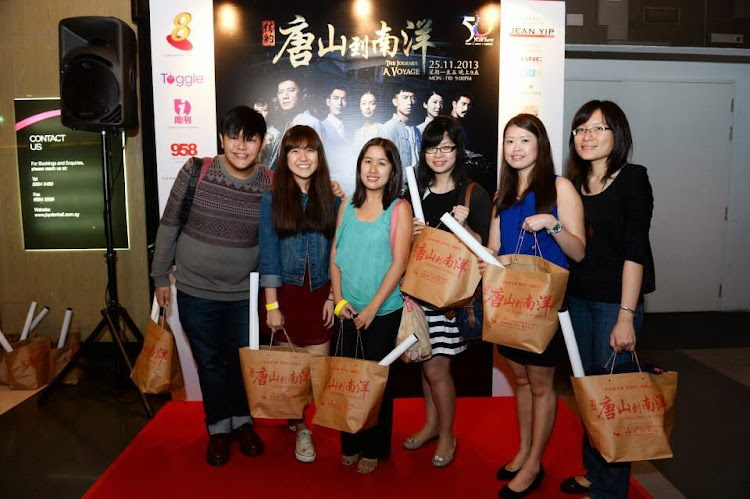 A photo with other bloggers that attended this event! 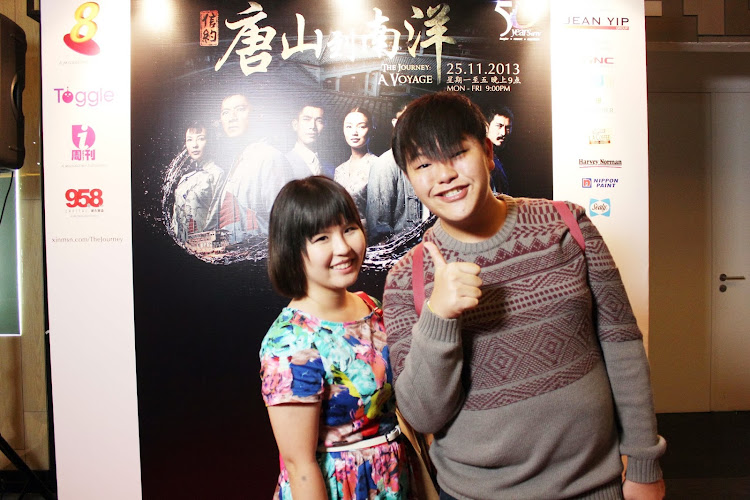 Coincidentally I bumped into Yan Teng, it's been a long time since I last saw her! 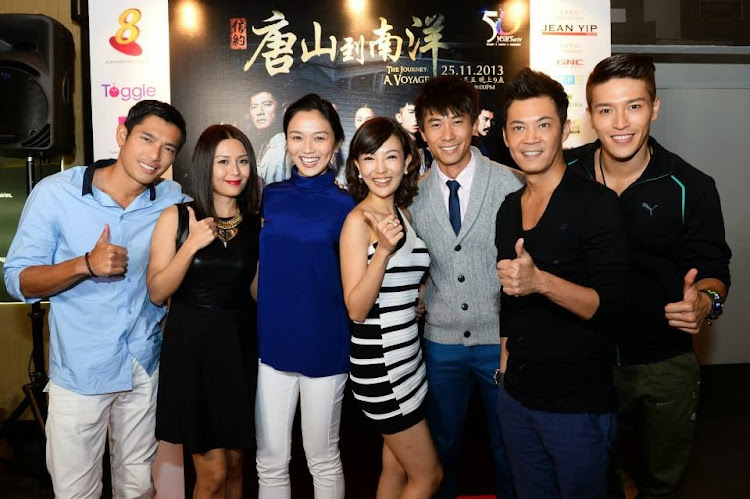 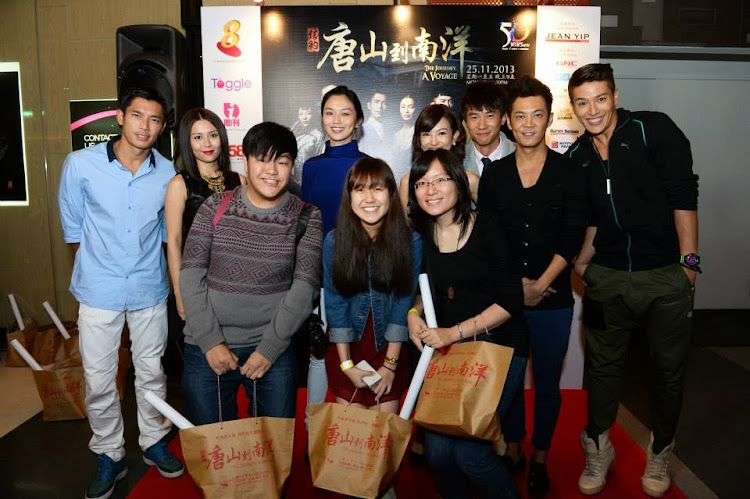 Photo Credits to: Channel 8  for the clear pictures and a group photo with the cast! 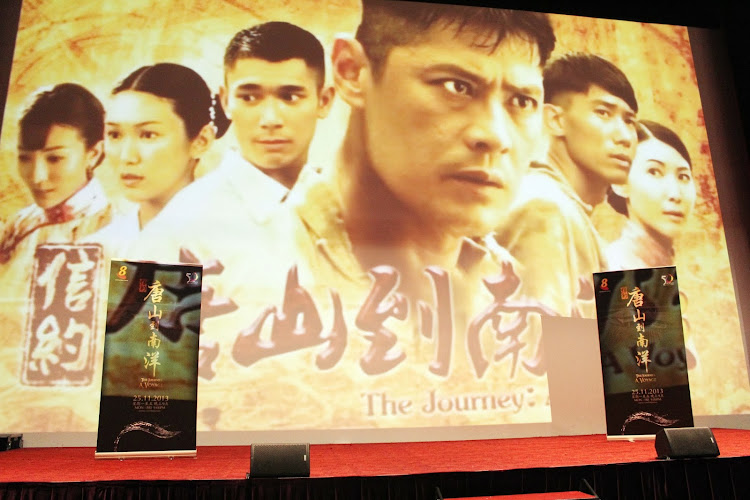 After the photo taking session, we were all lead into the screening theatre where they are going to ask the cast to come out talk about a brief description of their roles in the show and how they felt during the filming process. We were all also able to catch episode 1 of this drama on big screen!!! I have to compliment that the screen was really huge and able to allow the entire audiences to see from far. 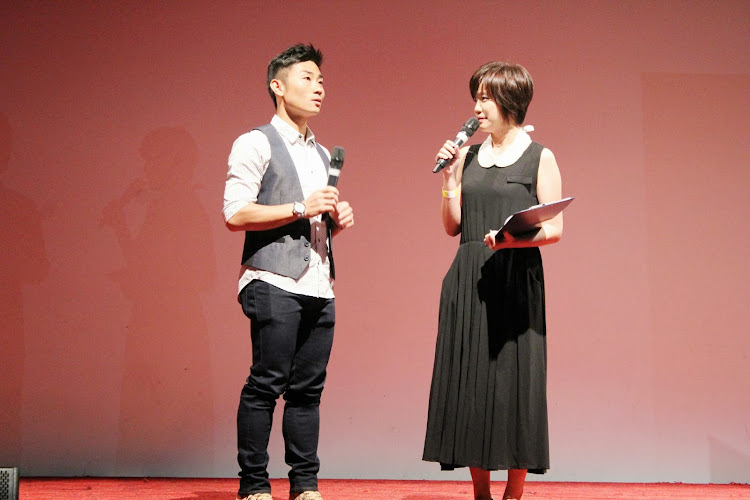 The emcee of the event was Mary Bukoh from radio station Capital 95.8FM. 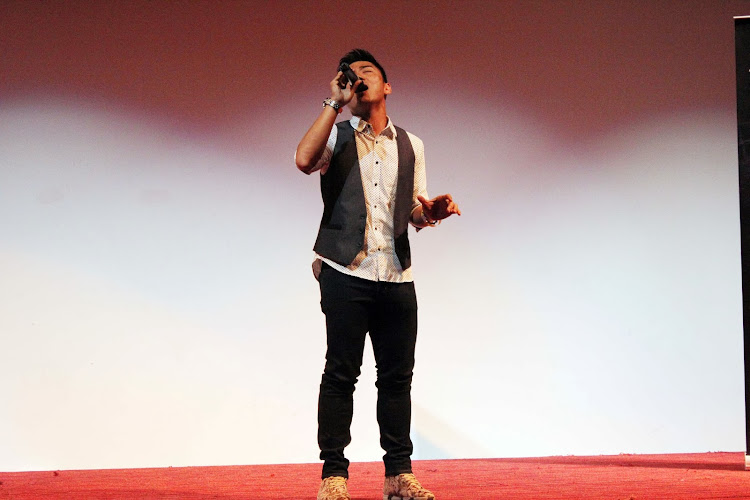 I'm a big fan of local drama theme songs and I always listen to them all the time. #likeliterally!! Alfred Sim, the singer performed the theme song of the drama "家乡" for us! I felt that his voice was very powerful and incredible as he could hit all the high notes (can't imagine me doing that haha). It was really an enjoyable performance that enticed the entire audience. 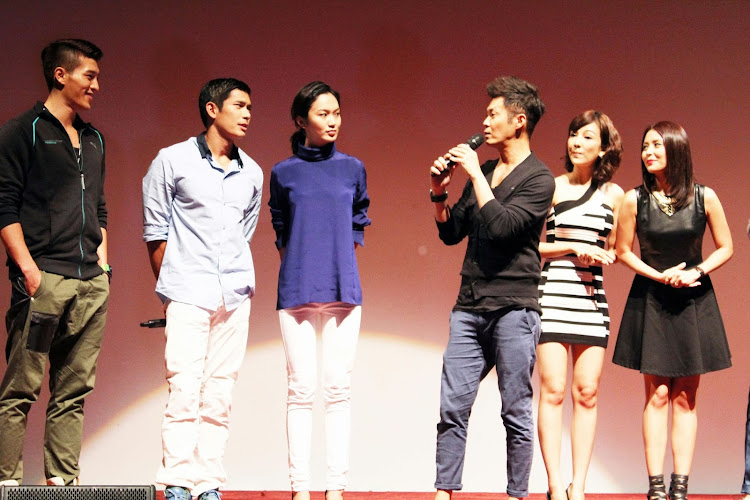 So just a few minutes before the screening, the cast came out for awhile to talk about the show and their experiences during filming. Elvin Ng acting as "Zhang Dong-en" and Joanne Peh acting as "Zhang Huiniang" are step-brother and step-sister relationship. They developed romantic feelings but they buried their emotions and kept a distance from each other. Joanne then married Allen Chen against her true wishes. 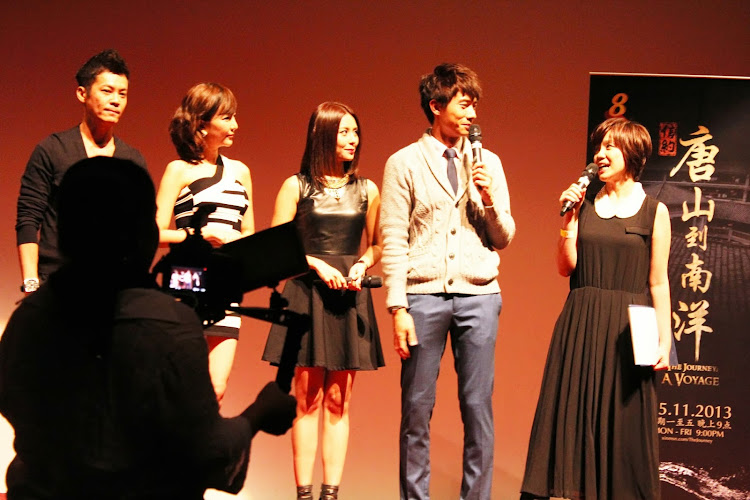 Desmond Tan acting as "Hong Shi" and Jeanette Aw acting as "Lin Yazi" travelled to Nanyang to earn a more money for their living. Hong Shi also has another nickname called “Little Stone” thus during this show, their love was put to test when Desmond heavily influenced by his uncle and got addicted to opium.

Chris Tong acting as "Bai Mingzhu", the daughter of a bankrupt landlord, unfortunately was arranged to marry Zhang Guangda (portrayed by Terrence Chao) as his second wife. In those days you can have more than 2 wives (so shiok lol) and forced marriage were popular as money is only their parent's concerned. 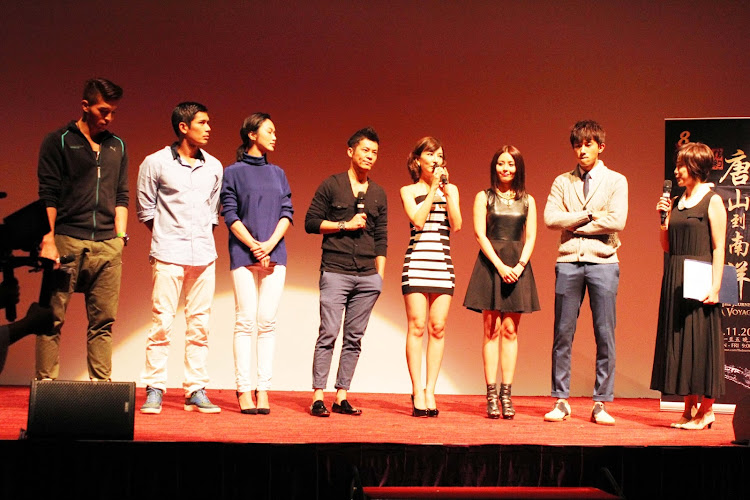 My thoughts after watching Episode 1 of The Journey: A Voyage:

The first episode was very interesting as it started off with fascinating and realistic visual graphics of Singapore rewinding back from the present to the past. *thumbs up* which I thought the editors really did a great job doing it. We also had a glimpse of watching the behind the scenes, you will soon notice the background was actually performed using the green screen. The episode included a scene when a group of immigrants were on a ship from Tangshan to Nanyang (Singapore) and starved for days because they have minimal food or water. This drama is definitely packed with many values to learn and as well to know where all our ancestors came from. I shall not become a spoiler here, but I feel that you should catch this show because it's something that you wouldn't regret watching and I even overheard that they started filming a YEAR back! Wow, the entire production team must have put into a lot of effort to make this drama a sucess. So be sure to watch The Journey: A Voyage, on 25 November 2013 (Tomorrow hehehe)! 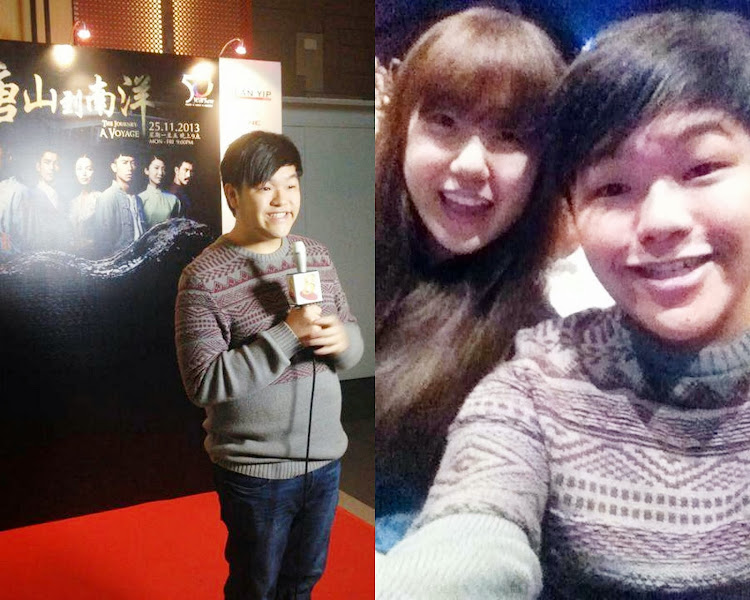 After the screening, I was so lucky as I was interviewed about what was my experience after watching the first episode. It was kinda nervous as I'm can't really speak well on camera as I tend to forget things on the spot! But it went really well! 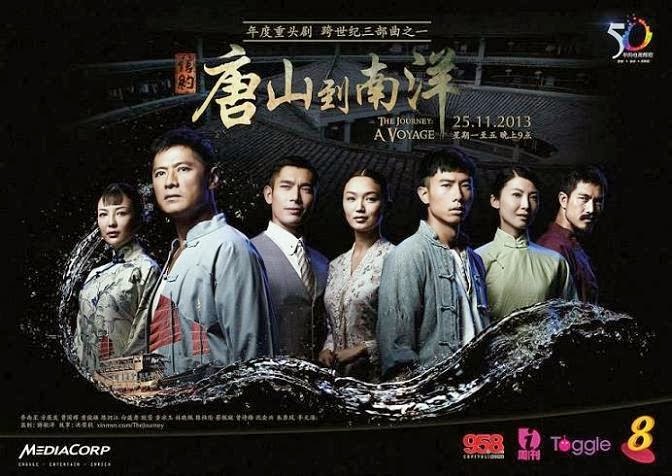 Make sure you don't miss an episode because trust me... it's something that you would be addicted to watching because every episode is so exciting that you would want to find out what is going to happen next! Special thanks to Channel 8 for this invitation! See ya!