Hello hello! Finally have the time to blog! I have been drowned with plenty of projects that needs to be submitted when school starts next year. Cannot really express the stress and pressure that I have been put into now but hey! We all need to take a chill pill once in awhile and also to distress! Eating is always the best way to get rid of these thoughts running wild in my head. Recently met up with my childhood friend, Natasha (more than 10 years of friendship and also the person that helped me a lot) for a mookata session at Tom Yum Kungfu. Actually did a little bit of research about mookata in Singapore because there are only a few and Tom Yum Kungfu happened to be one of them and there were plenty of good reviews about this restaurant! So I decided to come down and try too! You know that the mookata trend has recently hit the trend immediately after Korean BBQ. 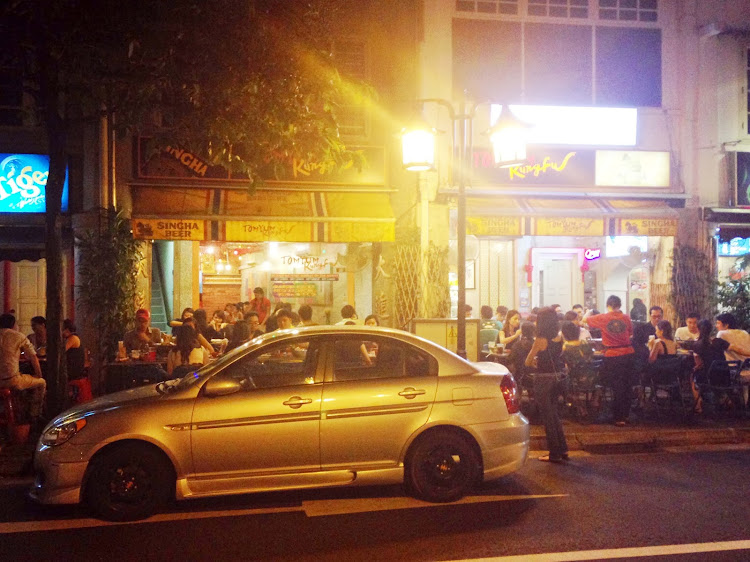 It is actually located deep within alongside of a road with pubs and many other eatery restaurants. Natasha and I were lost, cos we seriously have no idea where to go but we found out it was actually quite near from Clarke Quay MRT Station (roughly around a 5-7mins walk). Just remember to cross opposite from (The Central). You will see a Bah Kut Teh Shop over there, just walk along the road and it will lead you to the other side of the main road. After that, cross the road and you will see a road name called, Circular Road. Just walk along the ally, and you will see Tom Yum Kung Fu. (Lol don't know if you can understand my instructions but google maps did helped a little for me)! 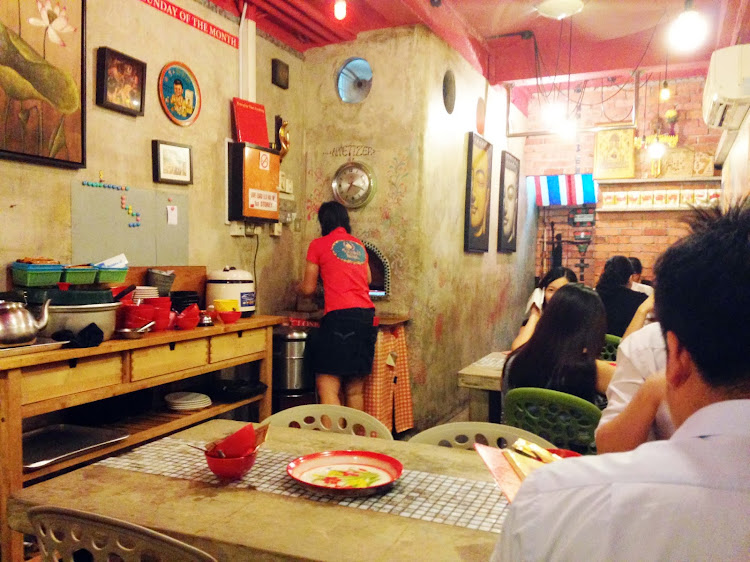 Thankfully, I went to make a reservation in the morning because I was expecting the restaurant to be crowded. Indeed it is, Natasha and I arrived around 730PM which was the dinner period and the shop was completely full house! So lucky, if not we would be sitting outside and enjoying the feeling of al-fresco dining lololol! But the interior of the shop was very ethical and you can feel how lively is the entire restaurant filled with traditional thai atmosphere, hahaha the thai songs were played! Overall, it kinda had the vintage look too! So it was rather a comfortable environment to dine in. 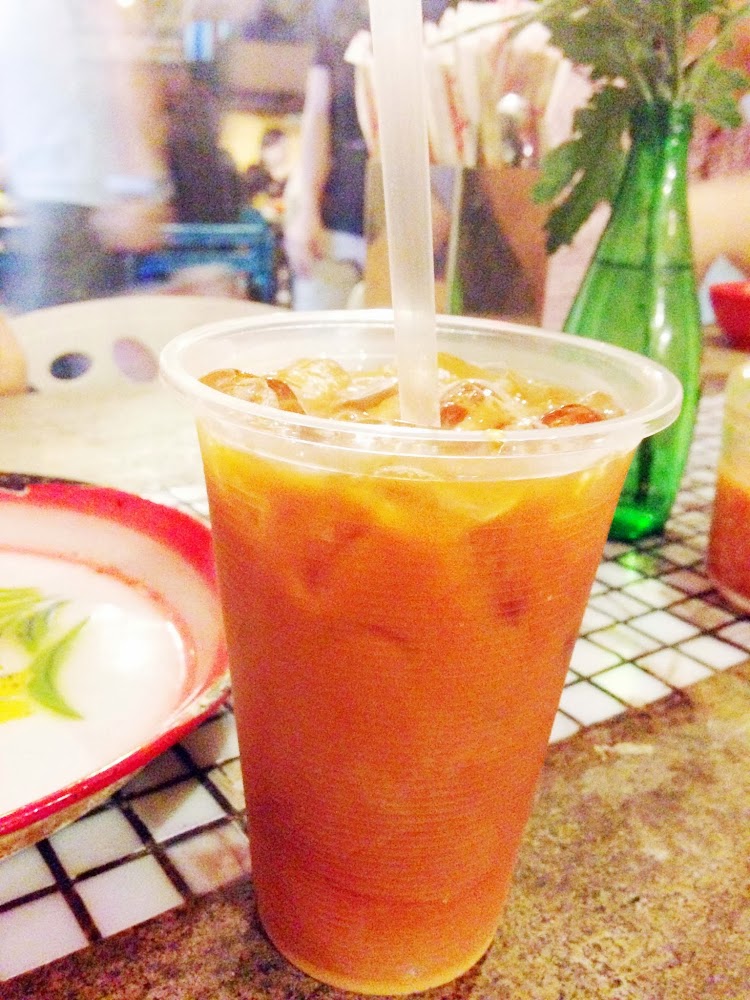 Nothing beats but a refreshing cup of Thai Ice Milk Tea with the undesirable hot weather in Singapore.
(They are usually sweeter than the teh pengs you drink outside.)
I love thai ice milk tea but it's not good to always drink it because it's really heavenly sweet! 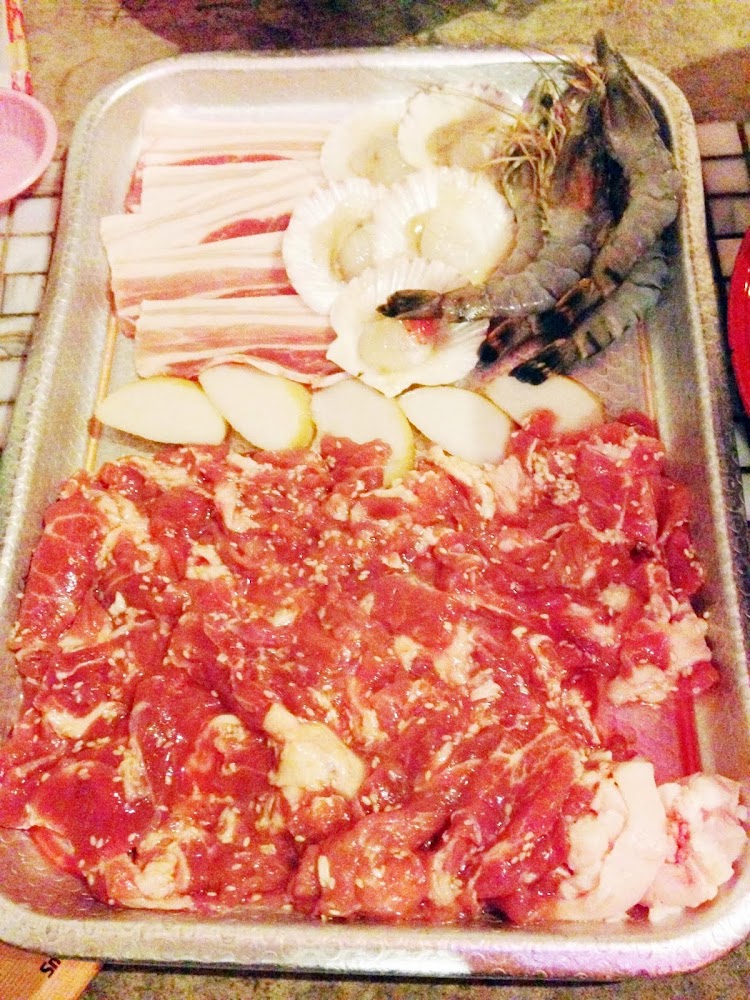 Ordred the 2pax serving which was sufficient for Natasha and I! (I initially wanted to order the 3-4pax because I was a big eater and I love meat) but the waiter suggested me to just get the 2pax one because I confirm cannot finish it and will end up wasting food! The 2 pax of comes in 2 pricing, $38+ and also $45+. We took the more expensive one is because the prawns were bigger and they used Lucky Tiger Prawns and there was a complementary maggie mee given for us to add to the mookata steamboat! Basically, the raw food was served in a metal tray (so got the feel lor). I felt the the food was "clean" because I'm always particular about food because we are going to be the one that are going to consume the food. They were very hygienic and the food were handled very carefully to avoid bacteria to enter. Can see how fresh the meat was and ready to be cooked! 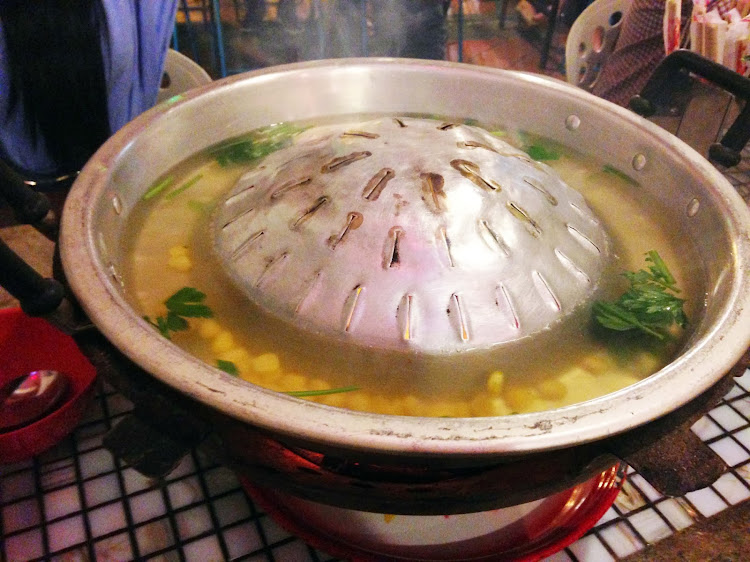 I seriously love how the shape of Mookata looks like! It's somehow like UFO-steamboat underneath they use charcoal grill, and NOT powered by gas fuel!!! It totally makes cooking your food more interesting! On top is actually allows you to grill your meat/food. After a while it will become chao-ta lah, you are supposed to use the lard as to spread the oil! Btw, it's an interesting fact because they use natural oil from meat but not those we usually use to cook our food. 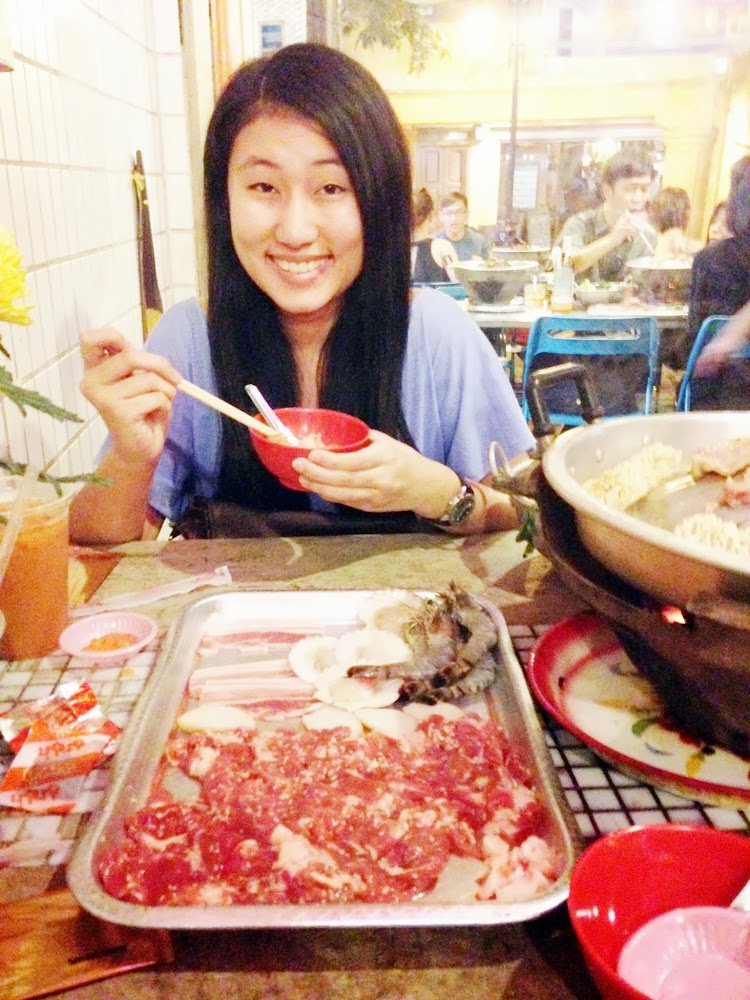 Natasha seems to be excited and took a candid shot! She just finished A levels and going to visit Japan for a holiday soon! She totally deserved it, I mean she's like really hardworking! I'm so proud to have a friend like her in my life! Thanks for accompanying me for dinner and a great catch up session for her because we haven't met for several months beaches of our busy school schedules! 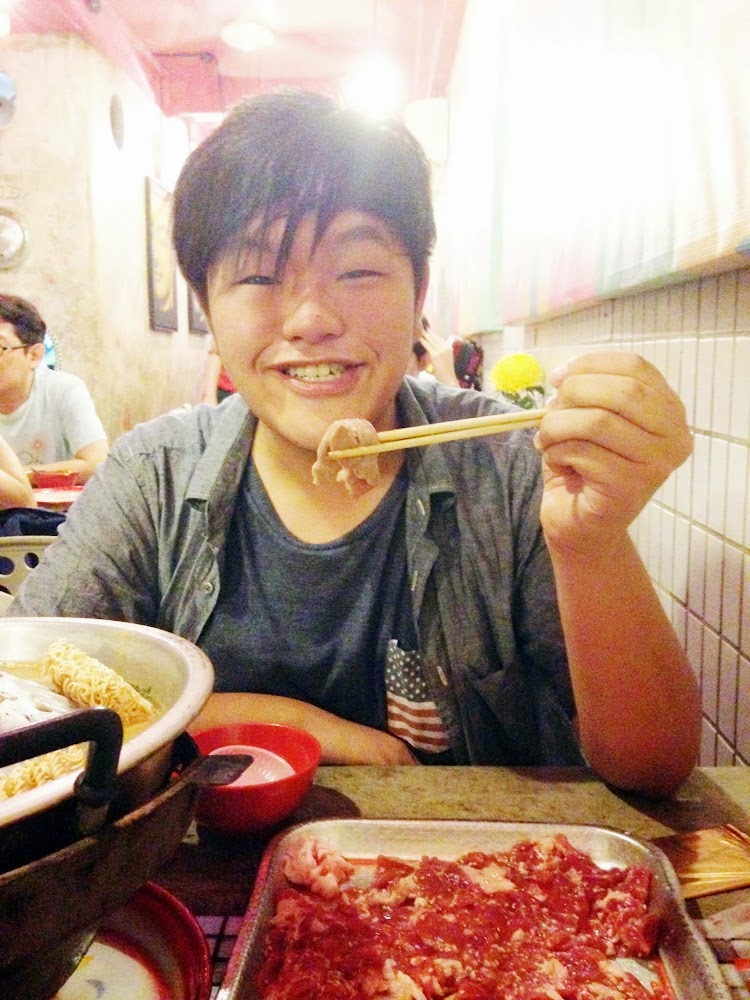 Didn't wanted to post this up because right eye was swollen and it kinda affected my vision. I shouldn't be wearing contact lenses on that day but I didn't really bother much cos I would have to end up wearing specs and my eyes would be really small (already small enough)! Hahaha! 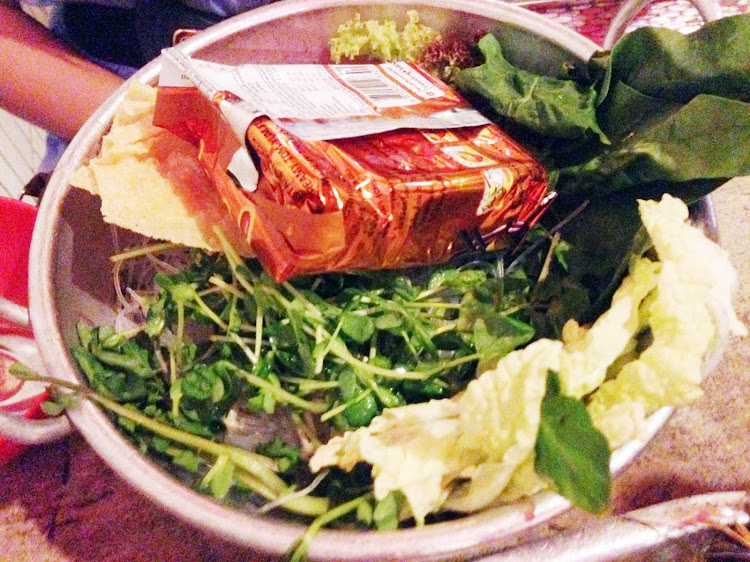 So it's not just only meat that was served, the package comes in a bowl of vegetables and a maggie mee. I love vegetables (just kidding lol). Only liked the mushroom and tang hoon. 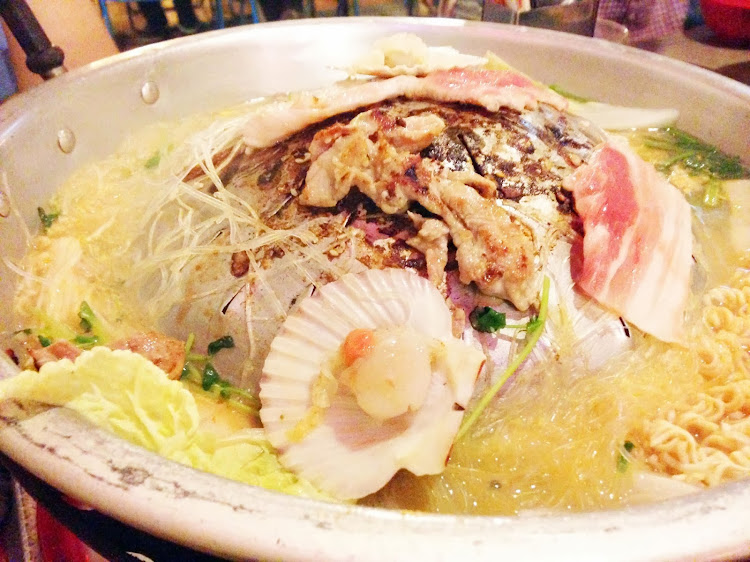 Looks really good right?! Just one annoying part that I dislike the meat drops into the soup! Hahaha cos it's places slanted mah, of course it will drop! I love the meat because they were marinated really well and it tasted really sullicet. I want to compliment the meat is because you really can taste it's some good quality meat compared to others. (I mean if you try it yourself you will know) cos I'm a person that will go for quality over the price. I would rather pay for something more than to satisfy my own cravings! Hahahaha #justsaying I mean most of us does that too right? 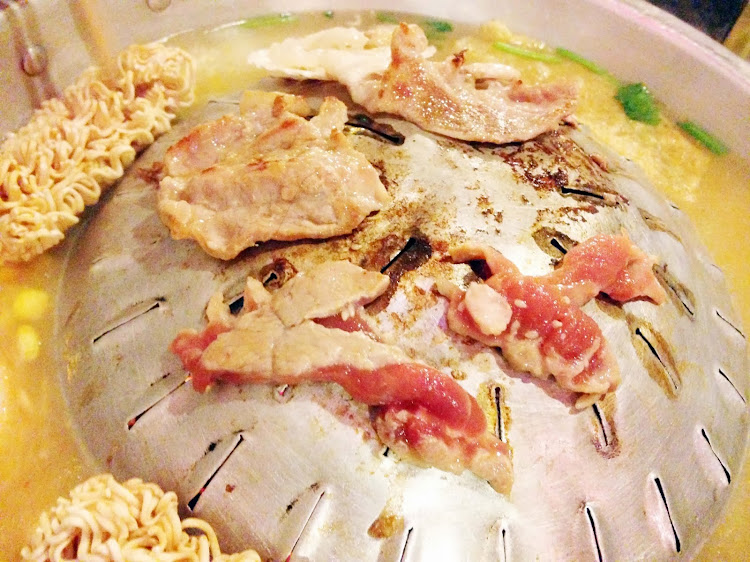 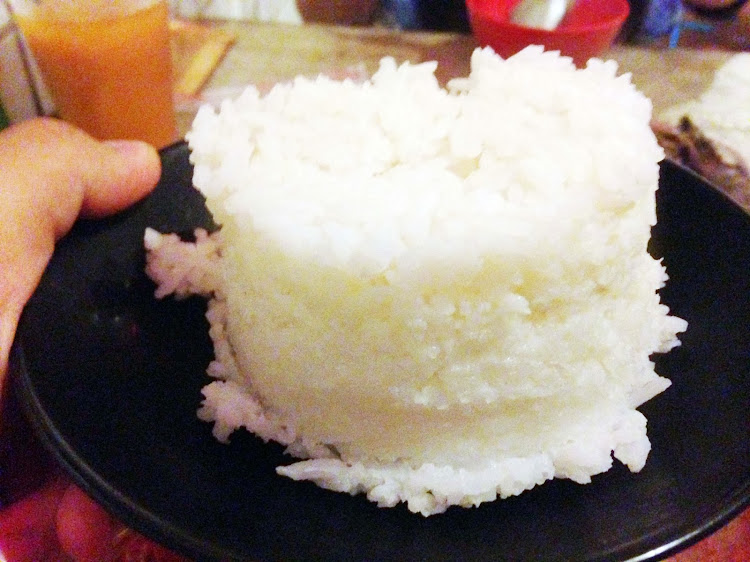 Even the shape of the rice serve was so unique, not the standard round bowl shape! 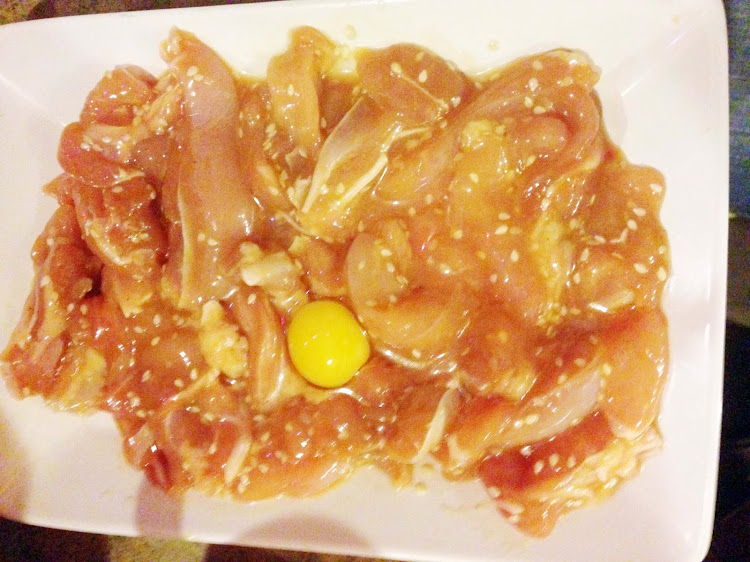 We didn't had enough meat, so we ordered chicken! Surprisingly, it came in a large plate. It was around $8? If i'm not wrong, you can see there is a raw egg inside the meant (which we totally didn't really expected that). It's so special lah!! 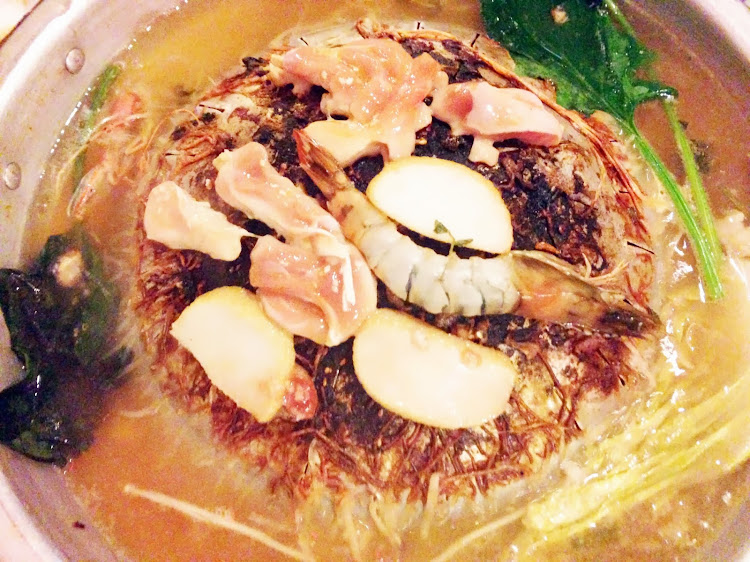 Okay, here's another pic. This will how you look after you eaten for around 30mins! There will be several chao ta area, because the heat will keep going on. Honestly, you don't have to worry the fire will run out because it was run by charcoal unlike gas that will run out cos it's limited. 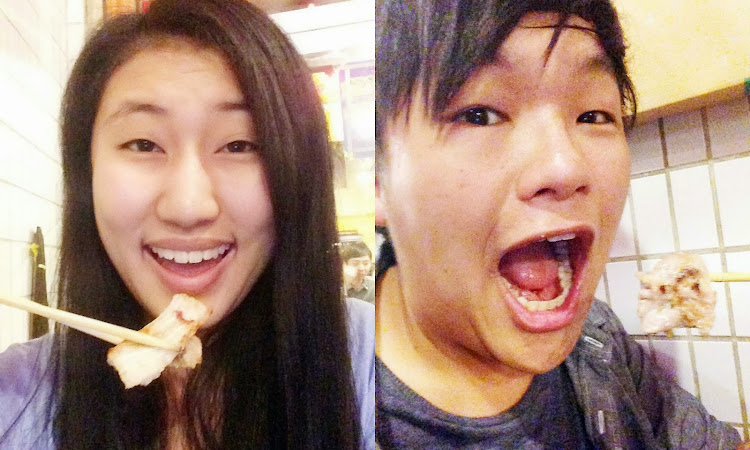 Overall, it was a wonderful experience spent at Tom Yum Kungfu! It is something that I will definitely recommend my friends and family to go! Though it might be a little bit pricy (spent about $62 for 2 of us), but it's worth for the quality of food you are getting! I will be coming back again! Mookata, you wait for me ah!